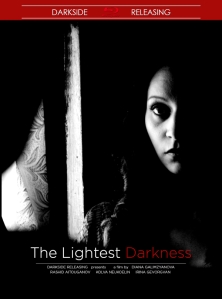 Spurred by film-noir momentum and Kafkian conundrum, The Lightest Darkness is a visually thrilling neo-noir set around the fictional City of “N” as two fearless women board a train for a dangerous trip. Arina (Irina Gevorgyan), an obstinate screenwriter who is currently seeking crime-related inspiration for a new video game, and Elina (Marina Voytuk), a self-reliant pianist who has witnessed the murder of a serial killer; share their car with Musin (Rashid Aitouganov), an insomniac, neurotic, and traumatized private detective who has been riding on the same train for six months, and whose bizarre behavior leads them to believe that he himself may be the killer.